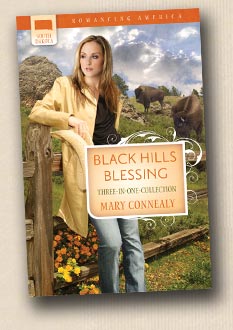 A three in one collection including

Buffy Lange has spent her life learning about, caring for, and protecting buffalo. She’s landed the job of her dreams, managing a huge buffalo ranch in South Dakota. With stars in her eyes, she imagines all of the Midwest given over to free-ranging buffalo. To her, buffalo embody beauty, majesty, and strength. To Wyatt Shaw, however, the buffalo are a constant threat. Wyatt’s ranch adjoins the Buffalo Commons and he watches in trepidation as its owner expands and rides roughshod over the local ranchers. Buffalo are wild, untamable, and dangerous. They present a hazard to man and beast.

When disaster strikes, Wyatt’s worst fears are realized and Buffy can do nothing but clean up the mess. With one determined to rid the area of buffalo and the other determined to see them flourish, the dust seldom settles around these two. Will they find a common ground or are they destined to forever stand alone?

Emily Johannson discovers a cranky man living in a derelict house in the woodland behind her ranch. When she orders him off, Jake Hanson tells her he bought this wreck and is planning to live there. He’s filthy, starving, and furious that Emily found him. He wants to be left alone. And she would if she didn’t keep needing to save his worthless life.

THE BOSSY BRIDEGROOM
Michael Davidson was a tyrant for a husband, and Jeanie was born to be a doormat.

They got along great.
Then Michael abandoned his submissive wife, just another way to be
a jerk.
Michael returns a Christian and wants to heal their relationship. Jeanie is in possession of the first bit of hard won self esteem of her life, and she doesn’t believe for a minute her cranky husband can change his ways.
They commit to building a healthy marriage but his new job as her boss slips them back into old habits.