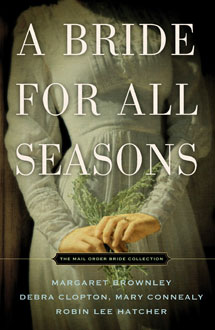 This charming bouquet of novellas introduces four Hitching Post prospects in the year 1870, each one eager for second chances . . . and hungry for happiness. Year in, year out, they’ll learn that love often comes in unexpected packages.

And Then Came Spring by Margaret Brownley

Mary-Jo has been unlucky all her life. But who would guess she’d travel halfway across the country to meet her match . . . only to find him dead!

An Ever-After Summer by Debra Clopton

Ellie had no idea she’s not what Matthew ordered. And what’s wrong with being a “Bible thumper” anyway? She’s determined to show him she’s tougher than she looks—and just the girl he needs.

Luvena would be perfect for Clay if she didn’t come with kids. But kids are a deal breaker, especially in a rough-and-trouble mining town. The trouble is, there’s no money to send them back. . .

David’s convinced he’s not long for the world. He needs someone to mother his boys when he’s gone—nothing more. Can plucky Irish Megan convince him to work at living instead of dying? sell her property and return to the luxuries of life back East.