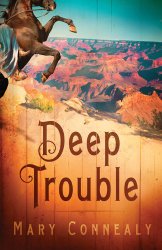 Shannon Dysart is searching for a city of gold, the lost city of Quivera, which she believes is in the bottom of the Grand Canyon. Gabe Lasley is trying to keep her alive until she comes to her senses. The only way he can figure to prove to her there’s no city of gold down there is to show her. And he needs to keep her alive until she admits she’s a lunatic. At which point she’ll come to her senses (he hopes) and then he plans on marrying her.

This is a plan that has Gabe a little nervous, what with him planning to marry a crazy woman, but there aren’t that many women around and he’s lonely.

Gabe has left his ranch in Wyoming because of his strong feelings for a married woman. He finds Shannon stranded in a mountaintop cave and saves her. She is on a quest to prove her father’s research isn’t the work of a madman, that he really did find a treasure in the wild west.
With trouble on their back trail from the villains who still want Shannon’s map, the dream of gold coloring every decision Shannon makes, and Gabe’s surprising need to protect her, they sets out to find a city of gold.

Along the way they find that true treasure is rooted in love. And that was within their reach all along.