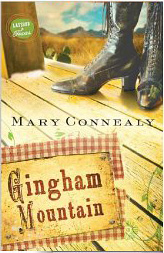 A rancher runs head-on into the new school marm, who believes he’s made slave labor out of eight orphaned children.

Grant Cooper crowds too many orphans into his rickety house, just
like Hannah Cartwright’s cruel father. Grant’s family of orphans have been mistreated too many times by judgmental school teachers. Now the new schoolmarm is the same except she’s so pretty and she isn’t really bad to his children, it’s Grant she can’t stand.